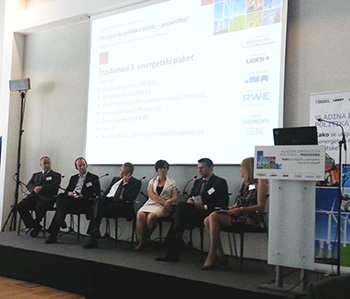 Croatia is ready for EU accession

The experts from Plinacro took part in the 2nd Regional conference on energy future which took place on 19 June 2013, in Zagreb, at the Hypo Centre. It was organized by the weekly Lider and sponsored by the Ministry of Economy. The main topics of this conference were related to the Third Energy Package, new tariff system, status of investments in energy and getting involved in the energy development of Croatia. About 150 participants from the private and the public sector took part in the conference.

In his introductory speech Mr Miodrag Šajatović, Editor in Chief, remembered how at the 1st conference there was euphoric atmosphere regarding investments in energy and added that each change has its opportunities as well as risks. He also said that he hoped that the conference would help eliminate doubts regarding proposals and projects. Ms Jelena Zrinski Berger, Assistant to the Minister of Economy, also addressed to everybody present and highlighted that Croatia incorporated directions of the Third Energy Package in its legislation and created the bases for the further development, which in a few years time could with decrease of energy import transform Croatia into an exporting country. “Croatia is at the turning point and the Government is working intensively to establish a system which will provide higher degree of utilisation and participation of EU funds” said Ms Zrinski Berger. After these introductory words Prof. Eraldo Banovac, Ph.D, Chief Advisor of HERA (Croatian Energy Regulatory Agency), gave a presentation on the Third Energy Package and highlighted that the aim of this Package is to create single EU market of electrical power and natural gas. This will result in reduction of prices and increase of standard services and security of energy supply. This presentation was followed by a panel discussion at which along with Ms Ivana Marković, Director of Capacity Management Division in Plinacro, were also present Mr Eraldo Banovac from HERA, Mr Miroslav Kulla from RWE Croatia, Mr Dejan Ljuština from PriceWaterhouseCoopers and Mr Tomislav Šerić from HEP.

The new tariff system for the renewable energy sources was also discussed at the conference. Ms Kristina Čelić, Head of Department in the Ministry of Economy, gave an introductory speech on this subject and the panel discussion which followed her speech showed that there is a significant potential in development of the renewable energy sources in Croatia, as well as the obstacles which need to be overcome. In the discussion also participated Mr Vjeran Piršić (EkoKvarner), Mr Mirko Tunjić (EHN), Mr Zlatko Zmijarević (HERA) and Mr Ivor Županić (HROTE- Croatian Energy Market Operator).

Mr Krešimir Perica, Sales Director of IBM business solutions in CEE revealed to the participants of the conference, in more details, what the energy market brings. He focused especially on the position of users and on what they expect from the future energy suppliers as well as on how future suppliers can satisfy the users and how IBM can meet all market challenges.

The introduction into the discussion on the topic New investments- national projects was made by Mr Dragan Marčinko from the Centre for Monitoring Business Activities in the Energy Sector and Investments (CEI), who briefly went through the plans and implementation of investments in the energy sector until 2020. As for the energy sector there are all together 36 projects worth EUR 9 billion, and 10 projects worth EUR 5 billion have been seeking for the private investments. HEP is practically the carrier of the investment cycle along with Janaf and Plinacro. It is planned to implement investments worth EUR 436 million during this year, which in comparison to the last year makes an increase of 115 %. His speech was followed by the panel discussion at which along with Vladimir Đurović, Director of Department of Strategic Planning  in Plinacro, were also present Ms Ljubica Cvenić from HEP, Mr Dragan Marčinko from CEI, Mr Goran Šaravanja from INA, Ms Gordana Sekulić from Janaf and Mr Mladen Vedriš (Faculty of Law in Zagreb ). Đurović pointed out that Plinacro has submitted the Plan for the new ten-year cycle to HERA and has been waiting for their reply. He warned about the market investment risk due to reduced gas consumption and wondered if Plinacro will be given approval for the tariff which will guarantee continuation of investment.
Previous topic:
2nd Regional conference on energy future organized by Lider
Next topic:
Pupils from the high school “Ivan Švear” from Ivanić Grad visited Plinacro´s gas node Kutina