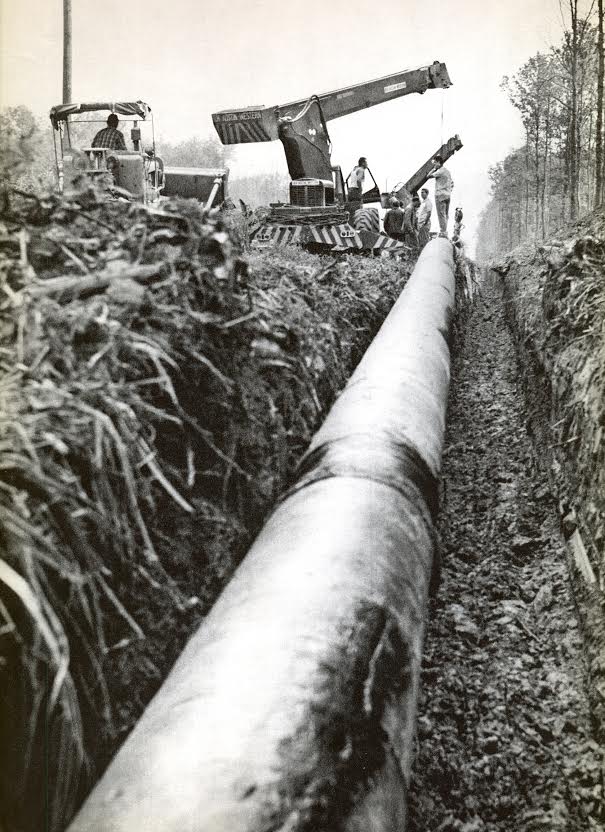 The construction of the first main gas pipeline from Janja Lipa to Zagreb started in 1954; it was 150 mm in diameter, 98 km long, and it was completed in 1959. However, its first section from Zagreb to Ivanić Grad was completed by the end of 1955. Therefore, in December that year the start of supply of Zagreb marked the beginning of utilisation of natural gas as an energy source.

In 1956, from Kloštar to Zagreb approximately 18 million cubic metres of gas were transported, at pressure of 5 to 6 bar.

This year was therefore taken as the start of the gas transmission activity in Croatia.

The discovery and production start-up of the gas field Okoli in 1963 was a turning point in the technology of natural gas production, preparation and transmission.

The gas transmission system was upgraded from an operating pressure of 25 bar to 50 bar, creating the preconditions to increase both natural gas production and the quality of its economic and energy evaluation.

In the recent history of the gas transmission development, implementation of the three development-investment cycles need to be pointed out which provided 95% coverage of the Croatian territory with the gas transmission system. Namely, in the first decade of the 21st century, almost 1100km of new gas pipelines were constructed within the gas pipeline system of Pula – Karlovac (gas supply from northern Adriatic), Lika and Dalmatia (Bosiljevo – Split gas pipeline system, with separate regional gas pipelines) as well as central and eastern Croatia (Lučko – Slavonski Brod – Donji Miholjac – Dravazerdahely (in Hungary) gas pipeline system), which enabled import of gas from Hungary in 2011.
The first compressor station on the gas transmission system was constructed in 2020, which enabled bi-directional gas flow and transmission of large volumes of gas at the interconnection with Hungary, while the reconstruction of the main gas pipeline Rogatec – Zabok enabled a bi-directional gas flow with Slovenia as well.
The construction of the Zlobin - Omišalj evacuation gas pipeline and the LNG terminal on the island of Krk at the beginning of 2021 enhanced the security and stability of gas supply to Croatia, while the bi-directional interconnections with Hungary and Slovenia enhanced the security and stability of gas supply to central and southeast Europe.