Information on signed Intergovernmental Declaration for Ionian-Adriatic gas pipeline and MoU on implementation of this Project between Swiss Company EGL and Plinacro Ltd. 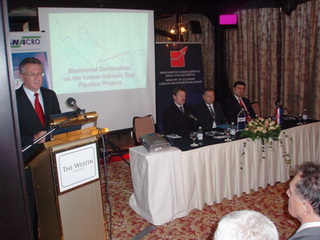 On Tuesday, September 25, in hotel Westin in Zagreb, Minister of Economy, Labour and Entrepreneurship, Mr. Branko Vukelić, Minister for the Economic Development of Montenegro Mr. Branimir Gvozdenović, and deputy Minister of Economy, Trade and Energy of the Republic of Albania, Mr. Neritan Alibali signed the Intergovernmental Declaration for Ionian-Adriatic gas pipeline which would connect the Trans-Adriatic gas pipeline and by which the Swiss Company EGL intends to connect Greek, Albanian, and Italian gas transmission system with the central eastern, Caspian and Russian natural gas deposits. After the signing of Intergovernmental Declaration Mr. Branko Radošević, President of the Board of Plinacro Company, Mr. Joachim Conrad, Member of Executive Management of EGL Company and Mr. Nasce Afezolli, Head of Gas & Power East of EGL Company signed MoU on implementation of Ionian -Adriatic gas pipeline.

The Republic of Croatia has by its TSO, Plinacro Ltd. Company, by preparing and implementing the Plan of Development and Modernization from 2002 to 2011, made strategic step forward in gasification of Croatia. In the first investment phase which was accomplished last year, Plinacro constructed and put into operation 523 km of the new high pressure gas pipeline, 15 measuring reduction stations, and national dispatching centre with the remote control and supervision of the gas transmission system. Thereby the established goals have been achieved – the increase of reliability of the gas transmission system, direct connection of north Adriatic gas fields with Croatia, the new access to transmission system is provided and finally creation of the conditions for the accomplishment of the second investment development phase in which 443 milliun EUR will be invested by Plinacro.
By the construction of the planned gas pipelines and interconnections the long-term safe and reliable gas supply and transport will be provided for the consumers in Croatia and the possibility of natural gas transit for the neighbouring countries will be opened. Thereby, owing to the natural gas transit, Croatia will become strategically more important country with significant additional profit. Along with the construction of the planned new supply direction via Hungary, by the construction of Ionian-Adriatic transport-supply direction which would connect to TAP Project (Trans Adriatic Pipeline) four new gas supply directions would be provided; two from Russia and one from central eastern and one from Caspian region. This is the project by which the Swiss Company EGL intends to connect Greek gas transmission system from Salonika by the inland gas pipeline via Greece and Albania with Fier at Albanian coast and further on by off-shore Trans-Adriatic gas pipeline with Brindisi and Italian gas transmission system. This would create the preconditions for the supply of significant natural gas quantities from central eastern, Caspian and Russian sources for the market needs of the European countries. The representative of the EGL Company expressed the willingness for the cooperation and informed about the free available capacities of 5 Bcm of TAP for the Ionian-Adriatic supply direction, namely for the regional markets of Albania, Montenegro, Bosnia and Herzegovina and Croatia. Preliminary, this quantity would be allocated in the following way: For Albania (northern part) 1 Bcm/y, for Montenegro 0,5 Bcm/y, for Bosnia and Herzegovina 1 Bcm/y and for Croatia and neighbouring countries on this direction 2,5 Bcm/y.
Based on preliminary allocation of annual quantities, capacities and geographical- spatial basis the fundamental technical characteristics of Ionian-Adriatic gas pipeline are determined. The total length would be (FIER-PLOČE) approximately 400 KM; in Albania 170 km, in Montenegro 100 km and in Croatia 130 km. Subsequently, the total investments have been assessed to about 230 mil EUR. They do not include the investment in the compressor station which would be constructed in Croatia, if needed. The extraordinary potential of this project is founded on numerous synergic effects. That means that by the construction of Ionian-Adriatic gas pipeline the gasification of Albania would be easier, and it would create the preconditions of gasification of Montenegro, facilitate gasification of south Croatia and significant part of Bosnia and Herzegovina and enable diversified natural gas supply. Along with undutiful positive economic activities this gas pipeline would provide access to Albanian and Croatian storage capacities and considerable transit and subsequently the profit to Albania, Montenegro and Croatia.
Also, along with all these conveniences the important influence of this project to the decrease of gas smoke emission should not be diminished, because by the introduction of natural gas as ecologically acceptable resource the coal, wood and fuel oil will be replaced. This is even more important if we take into consideration that all countries through which the gas pipeline is transiting are oriented to tourism and that they have accepted the implementation of high ecological standard of environment preservation. Thereby the additional saving and the possibility of carbon trading are accomplished.
According to all above stated it can be seen that Ionian- Adriatic gas pipeline is of high priority regional project and as such it has the undutiful support of Energy Community of South East Europe, European Union, and the Banks, as well. During previous activities, initiated and lead by Plinacro the Bodies competent for energy of all countries it incorporates: Albania, Montenegro, and naturally Croatia, gave positive opinion and principally agreed on Project. After signing the Intergovernmental Declaration for Ionian-Adriatic gas pipeline and MoU on the implementation of this Project today, the activities on its structural, organisational and implemental definition will be intensified.
Previous topic:
Information on signed Intergovernmental Declaration for Ionian-Adriatic gas pipeline and MoU on implementation of this Project between Swiss Company EGL and Plinacro Ltd.
Next topic:
Plinacro - Partner of the 9th SIMONE congress