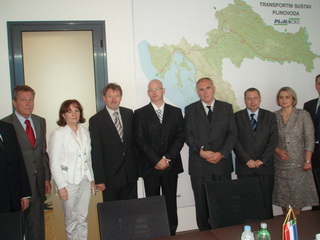 Immediately afterwards, the President of the Board of PLINACRO, B. Sc. Eng. Branko Radošević and the Chief Executive Officer of FGSZ Natural Gas Transmission, PhD. János Zsuga, as associated parties on the one side, and the President of the Board of Hrvatska elektroprivreda, M. Sc. Eng. Ivan Mravak on the other side, signed the Letter of Intent on capacity reservation for gas transmission in the planned interconnection system.

By the efficient implementation of the Plan of Development, Construction and Modernisation of the Gas Transmission System of the Republic of Croatia until 2011, the Republic of Croatia has, through its gas transmission system operator PLINACRO Ltd, already achieved a significant strategic step forward when compared to other countries in the region.
Along with exceptionally successful results related to the implementation of the plan of gasification of the entire Croatia, Plinacro pays special attention to planning and implementation of new supply directions and international connections – interconnections, thereby securing conditions of reliable natural gas supple for the Croatian market on a long-term basis, and opening possibilities of natural gas transit for the neighbouring countries.
The Republic of Croatia is thereby going to become more important from a strategic aspect, and achieve additional profit of the natural gas transit.

The implementation of the interconnection Slobodnica–Donji Miholjac–Dravaszerdahely–Pecs–Városfold is one of the main priorities of Plinacro Company, since it provides a new supply direction as well as connection and integration into potential huge international projects, e.g. Nabucco and South Stream. Following the Memorandum of Understanding (MoU) signed on May 31, 2007, and thanks to the very successful joint cooperation, it was possible to achieve technical harmonisation of the project to define all necessary parameters in a very short time; due to the mentioned the Letter of Intent was signed on July 3, 2008 in Zagreb between Plinacro Ltd and the Hungarian gas transmission operator FGSZ Natural Gas Transmission (former MOL Natural Gas Transmission Plc.). The Letter of Intent signed today confirms joint interest of the partners and commits the two companies to implementation of the project of interconnecting the gas transmission systems of the Republic of Hungary and the Republic of Croatia, through the construction of the international interconnection pipeline between Városfold in Hungary and Slobodnica in Croatia. By the proposed solution, the interconnection Croatia–Hungary shall be constructed as a single gas pipeline with the possibility of physical gas flow in both directions. Along with providing a new supply direction, this gives Croatia the possibility of gas transit to Hungary.