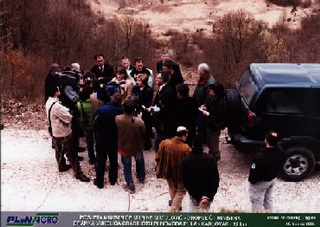 All works on the construction of the main gas pipeline Pula-Karlovac are being executed in accordance with the strictly set works schedule. That was stated by Minister of Environmental Protection, Physical Planning and Construction Marina Matulović Dropulić, Minister of Economy, Labour and Entrepreneurship Branko Vukelić, president of HERA (Croatian Energy Regulation Agency) Tomo Galić and president of HSUP (Croatian Gas Association) Miljenko Šunić on Tuesday, April 18, during their visit of a demanding construction site.
At the Plinacro Supervisory Board Session held prior to the site visit, Plinacro’s management reported to Ministers and managers of HERA and HSUP on the implementation of the first phase of the construction and modernisation of gas transmission system of the Republic of Croatia. In 2006 Plinacro’s employees have been intensively working on even 46 projects which shall, once completed, provide Croatia by the end of the year with new 500 km of the gas transmission system, along with the existing 1670 km.
The delegation visited the gas pipeline route along the sections II and III of the total length 100,5 km which are being constructed by Habau-Ghizzoni. The works on other sections are in progress, and the completion date is expected by the beginning of October, followed by connecting, testing, technical inspection and adjustment with the existing system and then connecting to the production field of the north Adriatic. In figures, 146 km of the route staked out, 112 km of the route prepared, 36 km of the trench dug out, 51 km of pipes delivered along the route, 26 km of pipes welded, and 10 km of pipes laid into the trench.
During the site visit the members of the delegation became aware that during the gas pipeline construction Plinacro is intrinsically governed by the intention to intervene in nature in the least visible way, and to keep the security and environmental protection at the highest level.
Next topic:
Information on signed Intergovernmental Declaration for Ionian-Adriatic gas pipeline and MoU on implementation of this Project between Swiss Company EGL and Plinacro Ltd.